Check the below for more details.

Once you have achieved a Caravan with any race, the event movie will be played and you will be warped to the event area.
*If your event is not starting, try below;
refreshing the map by moving to another map, or check whether the World Map is installed in your Caravan Interior.
*If you want to go back to the quest you were proceeding before the event, simply select AUTO of the quest you want to go back from your quest list. Auto function will bring you back to where you were. (To do this, you need to install World Map in your Caravan first.)

Enjoy this special event thoroughly and make the collab Heroes – Naofumi Iwatani, Raphtalia, and Filo your allies!
Moreover! By clearing all the quests prepared for this event and getting all the login bonuses, you can get Anima enough to evolve Naofumi Iwatani from 3 to 6★!
Naofumi Iwatani’s 6★ Main Equipment is also waiting for you as a special login bonus. Train your Shield Hero and proceed the event story with collab Heroes!

*Heroes’ images used in the image above are after 6★ Evolution.

You can get Naofumi Iwatani’s Anima from following sources. 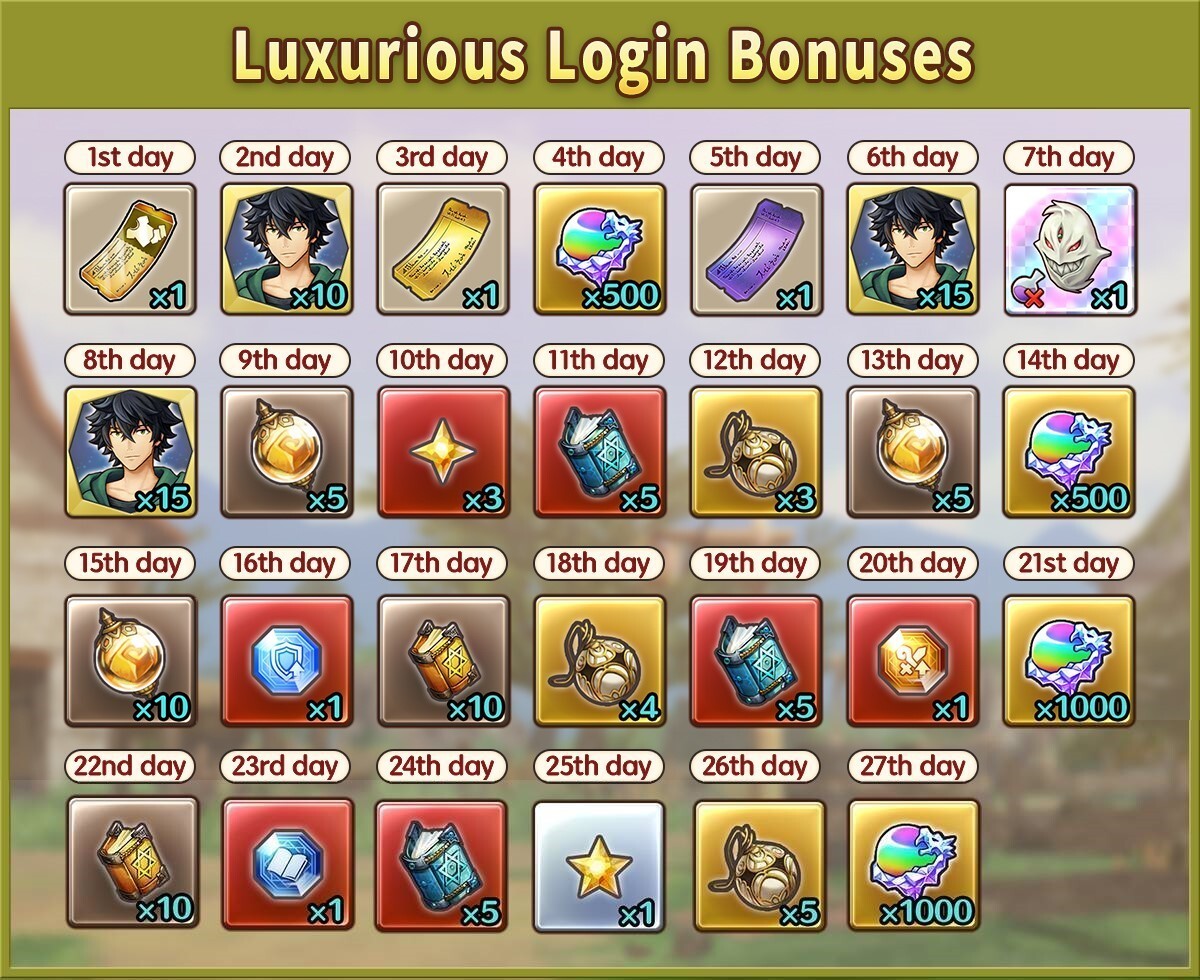 *Naofumi Iwatani’s 6★ Main Equipment distributed as a login bonus cannot be used as a Fusion material.

■Available until;
Apr 18, 11:59 pm JST
*The login promotion ends when you receive all rewards within the period.

By clearing event exclusive quests, you can get various items – special EXP Orbs only for Collab Characters, Another Dimension’s Coins you can use in event shop.

*Sub quests will be unlocked by the the progress of event story quest.

[Apr 6 updated]
[Monster’s Egg] has been added to the Slave Trader’s shop lineup.

Luxurious items are waiting for you in the Another Dimension’s Coin Shop.
There are three main shops in this event; Magic Shop, Weapon Shop, and Slave Trader. Don’t forget to exchange useful items including Naofumi Iwatani’s 5★ Main & Sub Equipment, Gems of various Attributes needed to evolve Heroes, Battle Manuals used to strengthen the skill, and lot more!
Another Dimension’s Coins can be earned by clearing event sub quests or defeating Beasts on the event area.

■Exchange period
the maintenance on Apr 20

Shield’s Anima Tickets can be traded to certain Collab Characters’ Anima.
Never miss this chance to train and upgrade your Heroes!

Open Monster’s Eggs to get Filolial, the event limited Beast! Other collab-limited Beast’s Gems are also hiding in this egg!


Wave is atacking Iyarr !
Stop the enormous amount of Beasts invasion with your friends and save Iyarr!

■Event Period
Until the maintenance on Apr 20

■When does the Event occur?
While event is live, Wave occurs in Riyute on certain time.


■Challenging Rules
You can challenge the wave by coming to the Riyute on time. There’s no limit for challenge counts.
Some limited Beasts will show themselves only when the Wave is occurring. Also, you can find Beasts with enormous power by meeting certain conditions.
Get extra rewards by defeating these strong Beasts and clear repeatable quests!

The quests below are automatically accepted by defeating 10 Wave Beasts.

[Apr 6 updated]
Heroes and Beasts eligible for the promotion have been added.

Upgrading promotion for Collaboration Characters is live!
Gold used for the following trainings is 70% off.
Also, the following collab Heroes will be granted powerful buffs in the event field battle!
Train your collab Heroes to help you progress through the story!
*Cetain battles in story quests or some special battles are excluded.

Get EXP Orbs only can be used on Collab Characters as rewards of the following quests.
You can repeat these quests! Never miss the chance to level your characters up!

Six new collab outfits are on sale!
Get an Another World’s Outfit Ticket as Login Bonus and exchange to event exclusive outfit! Also, these Tickets are on sale for a limited time!
Moreover, discount promotion supporting Heroes is live! Evolution costs are 50% off for eligible Heroes and Beasts.
Don’t miss out!
For more details of Collab shops, refer to here.

Evolution costs of the Heroes who have The Rising of the Shield Hero Collaboration Outfits is 50% off!
Never miss the chance!

[Apr 6 updated]
Heroes and Beasts eligible for the promotion have been added.

Promotions for upgrading certain Beasts are live during the event period!
Don’t miss the chance to train them!

*[Gems for evolution will drop regardless of their rarity] is limited to the event area.
*Please note the evolving cost discount promotions do not overlap, and so do other promotions with same effects and targets. When evolving collab-limited Beasts, 70% off promotion will be applied.

Use Annihilation Mission of the Shield Hero Ticket given as a login bonus during the event period to enter a special Ravaged Battlefield!
Difficulty of this dungeon is quite high, so multiplay is highly recommended. Let’s work with other Adventurers to defeat the enemy lying deep in the labyrinth!

From today, two new Heroes are making their debut in the Hero’s Trial – Motoyasu Kitamura the Spear Hero, and Glass the Invader from another world.
Take on the challenge to these powerful Heroes from another world!

■Challenge Conditions
Talk to Hero’s Trial Administrator standing in front of the Hero’s Trial
*Motoyasu Kitamura will be standing in the area on the first day, and Glass the second day. The Hero you can challenge will be changed daily.

Please note these items will be deleted at the time of maintenance referred.